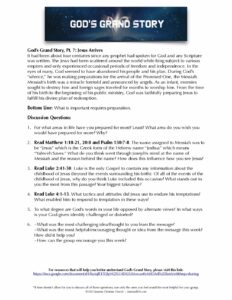 It had been about four centuries since any prophet had spoken for God and any Scripture was written. The Jews had been scattered around the world while bing subject to various empires and only experienced occasional periods of freedom and independence. In the eyes of many, God seemed to have abandoned his people and his plan. During God’s “silence,” he was making preparations for the arrival of the Promised One, the Messiah. Messiah’s birth was a miracle foretold and announced by angels. As an infant, enemies sought to destroy him and foreign sages traveled for months to worship him. From the time of his birth to the beginning of his public ministry, God was faithfully preparing Jesus to fulfill his divine plan of redemption.